Tsum Valley Trek takes you to one of the most isolated regions of Nepal. Tsum is a hidden valley, surrounded by gigantic mountains and hills so it is an incredible experience of exploring such a valley that is unseen and unexplored. The name Tsum is inspired by the Tibetan word “Tsombo” which refers to bright or vivid.

The major attractions of Tsum Valley Trek include the unity in diversity among people, the sacred history of the region, the peacefulness in there, and the astounding sceneries of Ganesh Himal ranges, Siringi Himal ranges and several other peaks. Various ethnic groups like Gurung, Sherpa, Bhotia, Brahmins and Kshetris are resident in there and their mutual harmony influences to reside with unity. Despite being identical in terms of ethos, foods, uniforms, and festival celebrations, the synchronization among them really teaches a lesson to the world about unity.

Tsum Valley is such a nonviolent place on earth where it is not allowed to carry any weapons, even the military and soldiers don’t carry arms. As well as, it is strictly prohibited to kill any animals in the name of slaughter for religions. Thus, Tsum Valley is still a restricted area that is not allowed for trekking unless you are certified with a valid permit. Generally, the special permit for Tsum Valley is valid for seven days. Since Tsum Valley Trek routes are inbounded within Manaslu Conservation Area, one should have Manaslu Conservation Area Permit along with a TIMS card and Tsum Valley Special Permit in order to embark on this trek.

Linked with the Tibetan border, the lifestyle and culture of Tsum Valley are highly influenced by Tibetan culture. Buddhism is the major religion of the region and hence Buddhist monuments are arts such as Monasteries, Chortens, Mani Walls and Prayer Flags are also appreciable during the trek. While on the other hand, there is a cave which is dedicated to the highly incarnated “Lama” and it is really amazing to explore such a mystical fact during Tsum Valley Trek.

Most of our hikes will be uphill and downhill thru the river banks of Budi Gandaki River and the lush bushes. Crossing suspension bridges and passing by the small settlements and exploring the ancient trading center such as “Philim” is also adorable during the journey. Himalayan Wildlife such as Blue Sheep, Himalayan Thar, Snow-leopard, Himalayan Marmot, Yaks, Mountain Pika, Tibetan Snow Cock, and alpine vegetations including Rhododendron, oaks, Yarchagumba, pine, juniper, and so on dwells along the trail to cheer up the trekkers.

Role of Tourism in Society and Environment

Trekking in Tsum Valley not just enlightens the trekkers with achievement, lifetime experience, and soulfulness but also allows them to contribute to social and environmental awaking. The cost from the permit is utilized in developing manpower and spreading awareness in order to develop and upgrade the lifestyle of the indigenous people.  Whereas, the locals are directly benefited by the trek since the local products are promoted as well as they get income-generating opportunities. In this way, Tsum Valley Trek is very helpful in civilization with the help of tourism in Nepal.

Tsum Valley Trek is a B-grade difficulty trek which means it is a quite arduous trekking experience. One should be physically fit and prepared enough to tackle the challenges and difficulties during the trek. Walking through the off-the-beaten trail for hours on narrow and two-footed paths which are really risky. Along with that, there are several rock-falling sites and landslide-prone areas along the trail which is really challenging if you don’t have proper knowledge of trekking and an experienced instructor along with you.

Time-frame should be planned very wisely in order to achieve the successful Tsum Valley Trekking experience. Since the winter is snowy and pathways get blocked as well as difficult due to heavy snowfall and during summer there are more probability of floods and landslides and also the leeches, it is not recommended. Nepal Mountain Trekkers recommends you to plan the trip during the months of autumn or spring in order to gain a complete Tsum Valley Trekking experience. Including the jaw-dropping sceneries, blossoming of flora and fauna and the travellers’ safety. 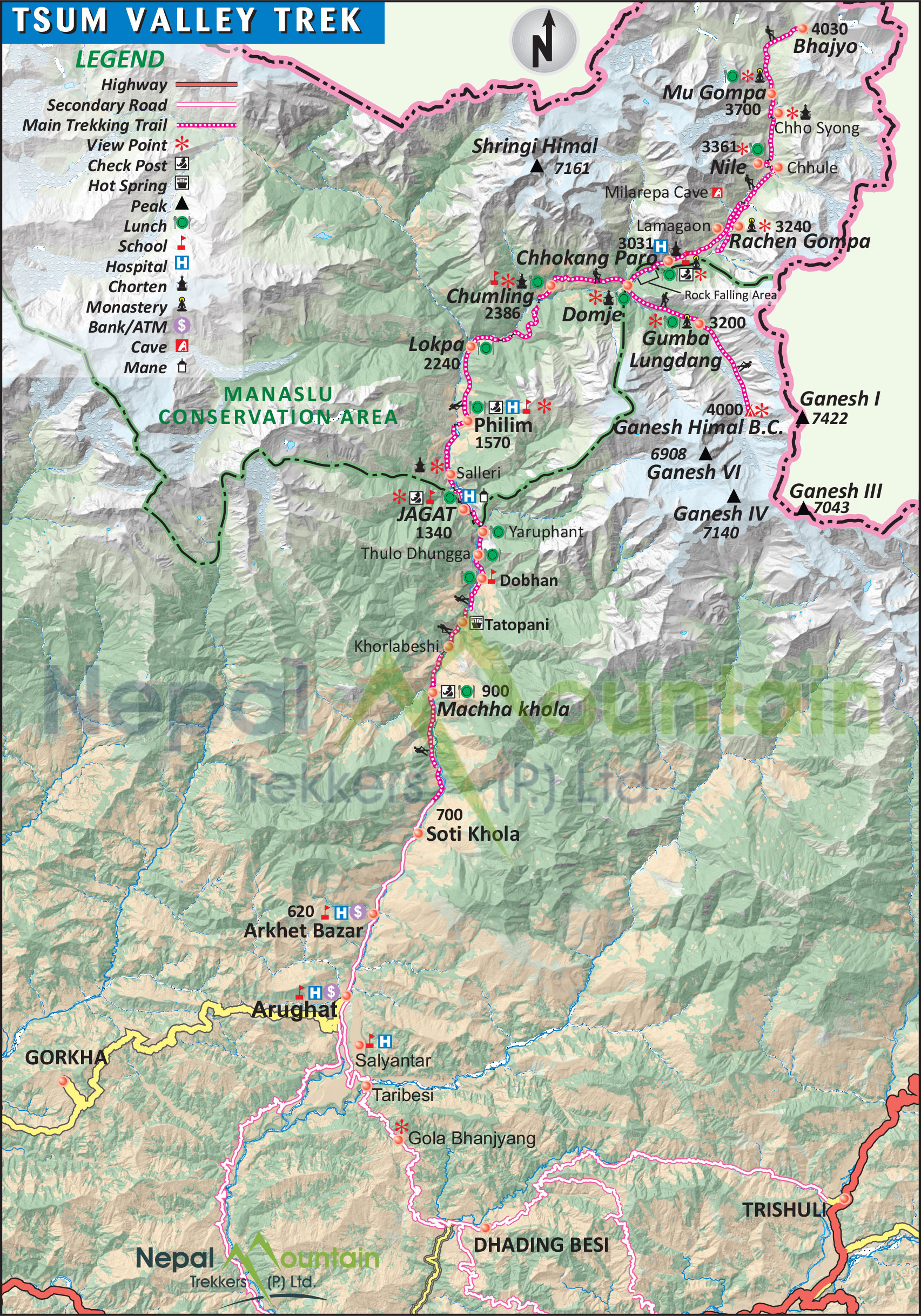 Our family came to Nepal and found Ramesh while we were staying at Hotel Horizon. He was incredibly helpful in arranging a trek that we could do with our 6 month old daughter. We did an 11-day trek to Tsum Valley with Suman, Daljit and Ammar, who all took amazing care of us and our friend who trekked with us. The trek was ideal for us, since we wanted to go someplace with less tourists, and where we could learn about local culture as much as possible. We stayed in comfortable guesthouses and one monastery, and had wonderful interactions with our hosts along the way. Suman even helped us arrange a blessing with a local Lama in the Tsum Valley to pray for our family. The views the whole way were incredible, the people won our hearts, and it was truly a lifetime highlight. Thank you so much Ramesh, Suman, Daljit, and Ammar! Hope to see you again